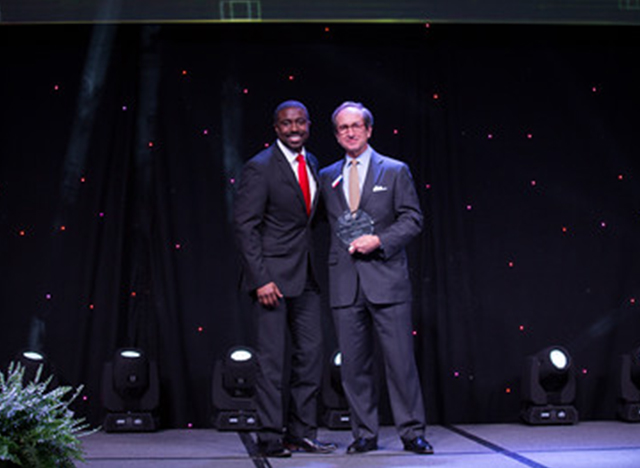 Read the full article on the Greenville News website.

The Minority Business of the Year Award recognizes the achievements of local, minority-owned businesses and the contributions they make to Greenville. Nominees must be actively involved in the community and demonstrate leadership and mentoring characteristics.

Each potential candidate must be a minority business as defined by the United States Department of Commerce, must have been in business in Greenville for at least three years and must be a for-profit organization, along with other criteria.

James Jordon has been willing to learn how to grow his business. Now that his company is well on the road to success, he is teaching others how to do the same.

“Jordon Construction is a general contractor,” he said. “We specialize in interior renovations and we focus in a few sectors — government, health care and public and private work.”

Jordon has taken his experience and used it to grow a thriving enterprise.

“I have been doing construction just about all my professional career,” he said. “I started here in 2012. It started with myself and just one other employee. Today, we have 14 employees.”

“A lot of that is attributable to government work,” he said.

“They gave us mentors,” he said. “They gave us resources to understand how to do government contracting. I had a liaison with the SBDC — early morning appointments. He would get on the phone and just walk me through. When we got started, we didn’t have contracts. I had time.”

Now, Jordon is focused on giving back.

“We took on interns this year,” he said. “We had five interns from community colleges in the area. They help us out as well.”

In addition, Jordon’s company is involved with Habitat for Humanity, Mercy House and Junior Achievement. The company also sponsored a cotillion candidate through Epsilon Tau Omega – AKA Sorority.

“With Junior Achievement, we go out to the elementary schools and speak,” he said.

“I was a kid that had a lot of energy,” he said. “I started getting involved in talent show competitions and I would get up and speak. I got involved in it through church. (The cotillion candidate) was something we wanted to support. Now, she is competing for college scholarships.”

Jordon, who grew up in Wisconsin, said the Minority Business of the Year Award is one that reflects Greenville’s diversity.

“The award is a testament to Greenville accepting a minority contractor,” he said. “The community helped us become successful. There’s a laundry list of supporters. We are just thankful to be a part of this community.”